6 ways to choose the perfect pair of cycling shorts

How difficult can it be to find a pair of padded shorts to keep you comfy on your bike? Harder than you’d think. Luckily, Duncan Moore has demystified the art of shopping for cycling shorts. Your nether regions will want to thank him.

Many years ago, when I got into cycling, the best piece of advice I got about choosing shorts was: the more panels the better.

It’s really quite sensible when you think about it. If a manufacturer uses just two pieces of Lycra, front and back, then those two panels will have their work cut out covering all the contours of the average cyclist’s legs and torso. You can see now why more panels make for better shorts.

However, there’s more to choosing the right pair of shorts than simply going for the most panels.

1. Getting the right length

Let’s start with length. The most versatile shorts finish mid-thigh. This is also the most common length. Yes, every manufacturer’s idea of mid-thigh is different, but fortunately, the differences are usually marginal. You’ll really only notice if you shave your legs to suit the length of one pair of shorts and then find another pair are shorter.

“A much better option for the cooler season is a pair of knickers.”

This length is great for the summer and when combined with knee warmers can be ridden in through autumn and spring. However, a much better option for the cooler season is a pair of knickers. No, stop sniggering, not those sorts of knickers. In the strange world of cycling knickers is the name given to three-quarter length shorts. Rather than finishing mid-thigh, knickers stop mid-calf. If you ride in cold weather your knees will appreciate the extra protection offered by knickers.

I’m just going to stay at the bottom end of the shorts for a moment longer. Despite Lycra being tight fitting, cycling shorts still make use of grippers around the bottom of the legs. The idea of grippers is to stop the shorts riding up and bunching, and believe me you don’t want that. 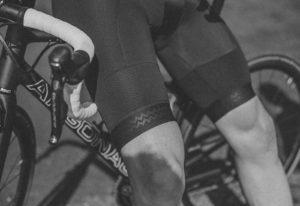 Unsurprisingly, different manufacturers have different ideas about what works best in the gripper department.

The most common type is a simple elastic strip along the inside of the seam. While it works, it can sometimes feel as though you’ve got an elastic band around each leg.

The next step up is a silicone strip. It’s not as constrictive as elastic but it can, especially on cheaper shorts, feel like you’ve got pieces of sticky tape in your shorts.

Better quality shorts will still use silicone but in ways that are much more leg friendly. An example is where the lower five centimetres or so of the leg is covered internally with little silicone dots, eg RedWhite’s The BIBS.

With the real high-end brands, you often see the company’s name or logo in silicone acting as the gripper. Isadore is one of the companies that does this. The smaller surface area of dots and logos means that they remove that strip-of-tape feeling.

Moving up a bit and there are yet more decisions to make on the style of your shorts. Regular or bib? If you’re unsure what I’m talking about, bib shorts are basically normal shorts with built-in braces. Both types have their pros and cons.

Wearing a regular pair of shorts makes taking a comfort break a fairly straightforward affair. I don’t really need to go into detail here, do I? The same cannot be said for bibs. I’ll leave you to think about that one for a moment.

While normal shorts are convenient, some riders don’t like them, as the elasticated waist can feel uncomfortable when bent over on the bike. Due to the cut of bibs, this is never an issue – there’s no elasticated waist to dig into you. 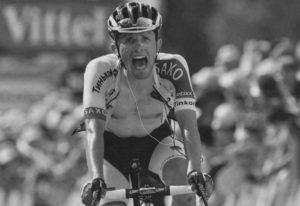 However, the thing that is going to make the biggest difference to your ride is the padded inserts inside your shorts. Commonly known as a chamois, because traditionally they were made from chamois leather, inserts have come a long way in recent years and for that you should be grateful. 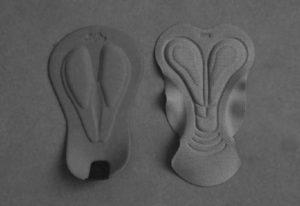 Shorts that still use a ‘real’ chamois are almost non-existent, partly due to cost but more because they needed so much care. Because they used leather you couldn’t just throw old style cycling shorts in the washing machine and forget about them. Oh no, they had to be hand washed, dried carefully and then treated to a dollop of chamois cream. Failure to do any of that would result in shorts with what felt like a piece of stiff cardboard in them caressing your nether regions. Don’t ask how I know, just accept my wisdom, okay.

Given that modern chamois are synthetic they don’t need any conditioning. Most hardcore riders instead use chamois cream to soothe their nether regions on long rides rather than to condition the chamois in their shorts.

The big differences in modern inserts are mainly thickness and shape. Once again much of this simply comes down to personal preference.

However, to simplify matters if you’re planning on doing a few century rides a thicker, wider insert, which will at first feel uncomfortable will come into its own as the miles rack up.

It’s also worth noting that the cut and pattern of inserts for male and female rider’s shorts is different, as is the general shape of the shorts.

When it comes to women’s bib shorts, the placement of the bib sections can make or break the comfort of the shorts. I have it on very good authority that having your nipples constantly rubbed by the bibs on a pair of shorts starts out irritating and soon becomes unbearable. For this reason, well thought out, properly designed, high-end women’s bib shorts will often feature a single central bib at the front that splits into two at the top of the sternum before becoming the normal two straps over the shoulders just like the T.laalalaishorts_s7 women’s bibshorts by ASSOS.

The last thing to think about is the weight and thickness of the materials used in your shorts. For most shorts, you’ll find they’re made from some kind of Lycra mix. What varies is the thickness or weight of the material. The usual rule is that more expensive shorts use thicker material.

The very thickest is known as Roubaix. As well as being heavier weight, the tighter weave of the material helps cut down on wind chill. The fleecy feel on the inside of the material makes it a popular choice for cycling knickers and winter cycling tights.

“‘Coldblack’ is said to keep you nine degrees cooler than untreated Lycra in direct sunshine.”

What about in summer time? Well, you can still wear your premium quality, heavyweight Lycra shorts because switched-on short makers are now frequently using a coating on the outside of their shorts called Coldblack. This treatment is said to keep you up to nine degrees centigrade cooler than untreated black Lycra shorts in direct sunshine.

If you want to see for yourself, try a pair of Nth Series bib shorts from Morvelo.

Now just to complicate your buying decision even further, if you’re buying bib shorts you have to think about the bib material too. Once upon a time the bibs were simply made from the same material as the rest of the shorts. Makes sense really, doesn’t it? However, what with the boom in cycling holidays (and global warming) people are riding in warmer conditions and complaining about being too hot in bibs. To counter this there are now bib shorts where the upper sections are made of mesh materials or a lighter weight Lycra.

While you’ve been doing your research into cycling kit, you’ll no doubt of heard of the term wicking. Basically, this means that the material used in the clothing is designed to draw sweat away from your skin to the outside of the fabric where it can easily evaporate. While this is commonplace in cycling jerseys it’s seen that often in bib shorts, where mesh panel allow sweat to easily escape. That’s not to say wicking bib shorts aren’t available. Try the Team Sky Replica Bib Shorts from Rapha.

Now you should be a bit better equipped to make the right decision for your next pair of shorts. No more chafing, chills or bunching. So what are you waiting for? Why not have a look through some of the brands on Bike Clothes to get some inspiration for your next purchase.

Help us improve! Give us feedback.